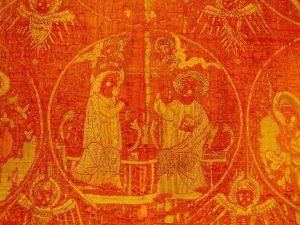 I’ve encountered samite in I don’t know how many bits of historical fiction, but it’s only now that I wonder what it actually is!

According to good ol’ Wikipedia, samite is a heavyweight silk fabric with a twill weave, although as time passed, the term came to be applied to any heavyweight fabric with a satin-y look. Wikipedia further states that samite originally used six yarns in the warp but I suspect that also changed, over time. You know how it is, once something gets popular, everyone starts trying to knock it off on the cheap…

Samite was a popular fabric among the seriously-moneyed set in the medieval period – nothing says I’m richer than you like heavy silk – and I’ve spotted fabric described as samite at various décor stores, but it was more a marketing term than an accurate description – especially with the small print admitting that its pure polyester.

If you’re looking at something called samite, unless it’s selling for $100/yard or more, it’s not the real deal. Silk twill is available for $15 – $20/yard, which is the closest modern-day equivalent, although it’s almost certainly lighter in weight – and easier on the pocketbook! 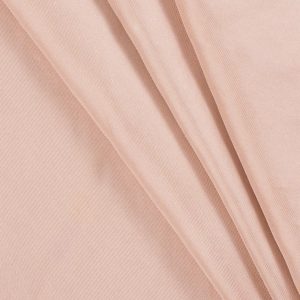 Silk twill. Click on the picture for a much larger version in which the weave is visible. Source: Mood Fabric.

Given its popularity in historical costuming, good-enough alternatives can be found among the jacquards, damasks and some brocades for the embroidered options, or try using a not-too-showy satin.

A silk twill, I’d sew with as fine a needle as I could get away with, and silk thread. All-purpose thread would do, in a pinch. As with anything silk, I’d hand-wash it in cold water and lay it flat to dry, or take it to a dry cleaner only if the bolt-end told me it was safe to do so.