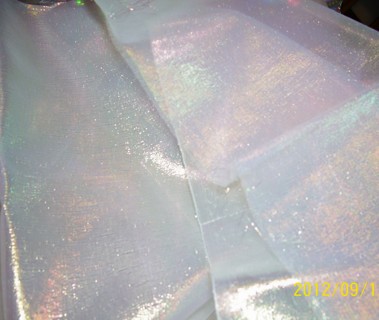 This really should be included with the sheers, but what the hell, I’m writing this and decided we should talk about it separately.

This is a sheer fabric, as you can see, and what makes it noteworthy is this feathery, opalescent sheen to it. Left to itself, this fabric can attract every little girl under the age of six within a quarter mile radius.

It’s not quite an organza, although I’ve seen it called “iridescent organza” or even “rainbow sheer” in some stores. I call it an opalescent sheer. At least, that’s what I call it in polite company. But we’re friends, right? So I’ll tell you what I really call it.

I call it a poxy son of a bitch* that likes to break sewing machines. Why?

If you take a close look at the fabric, you’ll see that the weft threads that give the fabric this rainbow, shimmery look are made of plastic. Not only are they plastic, but they’re very loosely woven into the fabric. So, as soon as you cut it, it starts to unravel and fall apart.

When you try to sew it, the plastic resists even the sharpest of needles. Instead of allowing the needle to pierce through, more often than not, that plastic thread will stretch or be pulled loose – because the weave isn’t all that tight – and interfere with your bobbin thread, preventing a proper stitch from being formed. Sometimes it’ll tangle up with your bobbin thread and cause a whole new level of heartbreak – possibly throwing off the timing of your machine and that’s a hundred-dollar trip to the repair shop. Who needs that?

How, then, do you sew it? I say don’t. I say find something else to use. But if you’ve just GOT to use this fabric, then I suggest you hand-sew it as much as possible. Failing that, invest in a straight stitch foot and throat plate for your machine.

You can try sealing cut edges with a flame, but the fabric is so light weight that you can end up losing a lot more of the seam allowance than you bargain for.

I have a chum who has had limited success using a soldering iron to fuse the edge of this kind of fabric. Either approach only addresses the issue of the fabric unravelling, the threads are still likely to catch on the needle of your machine. Get a straight-stitch foot for your sewing machine and a single-stitch plate as well – the plate has a smaller hole for the descending needle than a regular plate, which reduces the whole getting-pulled-into-the-guts-of-the-machine issue. Or you can hand-sew it.

Before you cut this, hand-wash it and lay it out to dry. It’s not going to shrink, but the stuff might still be outgassing from whatever polymers were used to make it and a wash might help. Don’t ever put it in the washer. A washer will shred it and a dryer will melt it. Don’t iron it, for the love of Pete. Just don’t.

*That’s the only rude word I use on this entire site. That should give you an idea of the depth of my feelings.