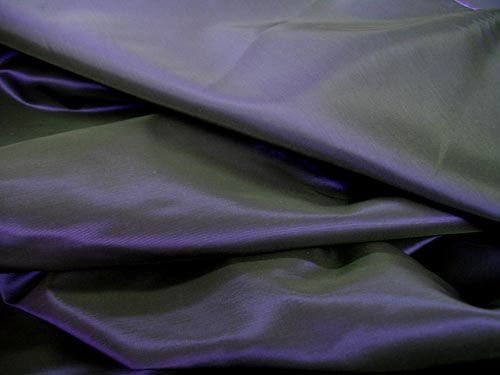 Acetate, like rayon, is a funky one. It’s sort of natural, but not really – it’s a manufactured fiber, like nylon and polyester, but derived from a natural source. Acetate is a cellulosic fiber. Cellulose – plant cells, usually derived from cotton or wood – are subjected to a chemical stew and the resultant goop is extruded as a filament.

Acetate was one of the first manufactured fibers created and was originally developed for non-textile use – as a coating for airplane wings during WWI.

It’s not something you’ll encounter very often at the fabric store these days but it pops up here and there – especially in the taffeta section. I’ve got some acetate taffeta in my stash and it’s heavier than polyester taffeta and with a more pronounced texture to it. I really like it, in fact, as some modern taffetas are so lightweight as to seem almost too flimsy to sew. Acetate is also popular as a lining fabric, drapery fabric and, when blended with rayon, as upholstery material.

Like rayon, acetate production involves some seriously nasty solvents, which is why you don’t see it around as much as you used to. Environmental regulations have made acetate more expensive to produce in the USA and Europe, and there are other fibers out there that fill the same niche that aren’t quite as nightmarish to produce.

Acetate fabric should be taken to a dry cleaner and not run through your washer. In a pinch, you can sometimes hand-wash it, but test with a scrap, first as you might be in for a nasty surprise. If you hand-wash it, use cold water and a non-chlorine based detergent. Do NOT put it in a dryer, at any temperature. It’s not just the heat, but the tumbling about is also a problem for acetate fibers.

There is a variant of acetate, known as triacetate, that is a little easier to care for in that it can be washed at home. It’s known for taking a crease well, so it’s popular for perms-pleated items, such as skirts.