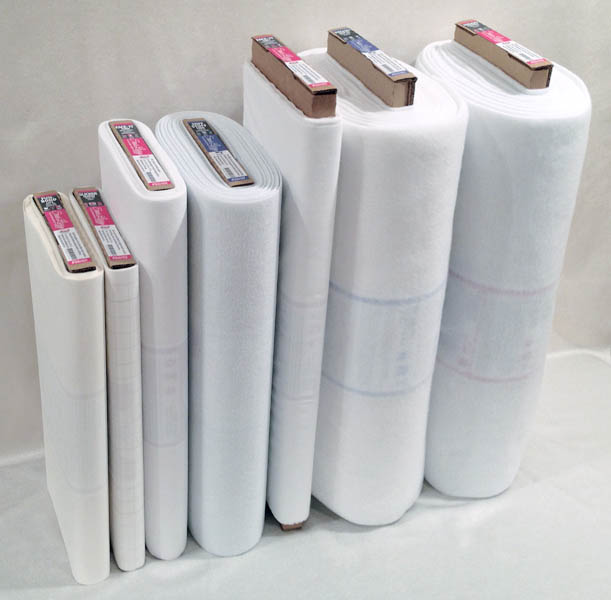 A selection of interfacings. Each serves a different, rather specialized, purpose. Source: lazygirldesigns.com

Interfacing is a material that’s used to add body and rigidity to another fabric, by stitching or gluing it to the wrong side. Sooner or later, you’re going to use it and you’re probably going to curse about it a lot, but it’s a lifesaver in many ways. It adds body to floppy fabrics, adds shape to garments and can extend the wearable life of your costume.

It should not be confused with stabilizers, which are physically similar, but serve a different purpose.

Broadly speaking, interfacing will fall into one of two categories: woven or non-woven.

Like they sound, woven interfacings are just like regular woven fabrics in that there’s a warp and a weft to them. Woven interfacing types include canvas, horsehair and calico. In fact, almost any woven fabric used to add structure to a garment can be called interfacing – just like an oak tree can be accurately described as a weed if it’s growing where it’s not wanted.

Non-woven interfacings are made from short fibers fused and mashed together in a bunch – kind of like how pulp is made into paper.

Interfacings that have heat-and-steam reactive adhesive applied on one side are called fusible interfacing, because you “fuse” it to the fabric with a steam iron and a damp press cloth. Whenever you buy fusible interfacing, a set of instructions usually comes with it, wrapped around the bolt with the material. Heed those directions well. You need heat, steam and pressure to activate the glue and to get the most out of it. If it’s not a fusible interfacing, then it’s called sew-in – whether it’s woven or non-woven. 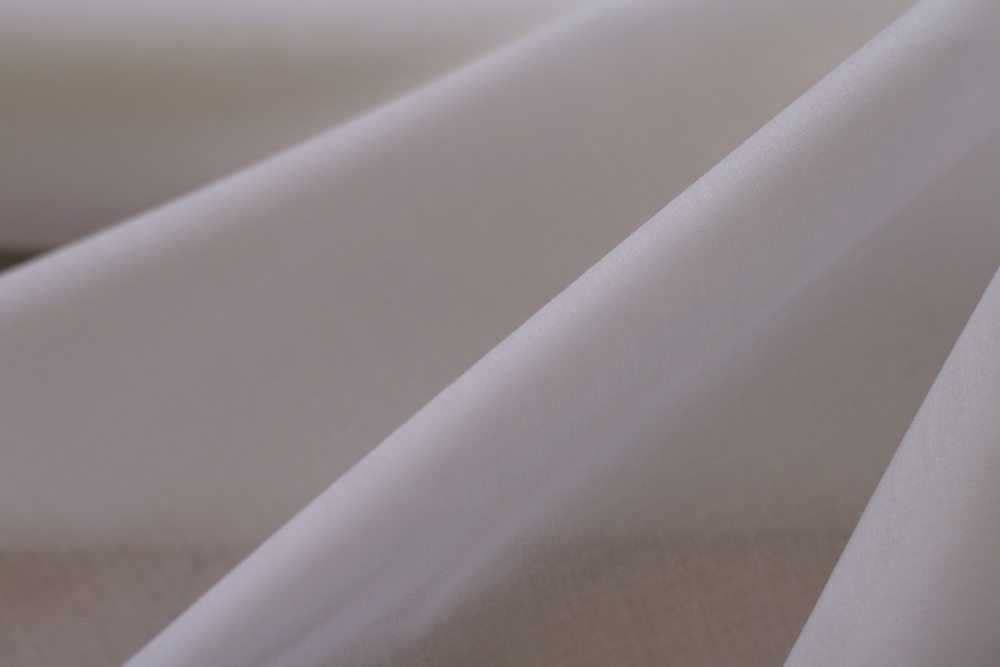 Woven interfacings are almost always non-fusible, which you attach by sewing them to your fashion fabric within the seam allowance. There are fusible woven interfacings, such as fusible hair canvas, but I don’t see them used nearly as often as their non-woven counterparts.

There’s interfacing for knit fabrics, too, although it has only a two-way stretch, not a four-way stretch. Look for “tricot” and it comes in sew-in and fusible varieties. I haven’t had to reach for it very often in my experience, but I once used it to add opacity to a very sheer knit that I used in a costume skirt – I didn’t need the world seeing whether I was wearing pantyhose or a garter belt under that thing! 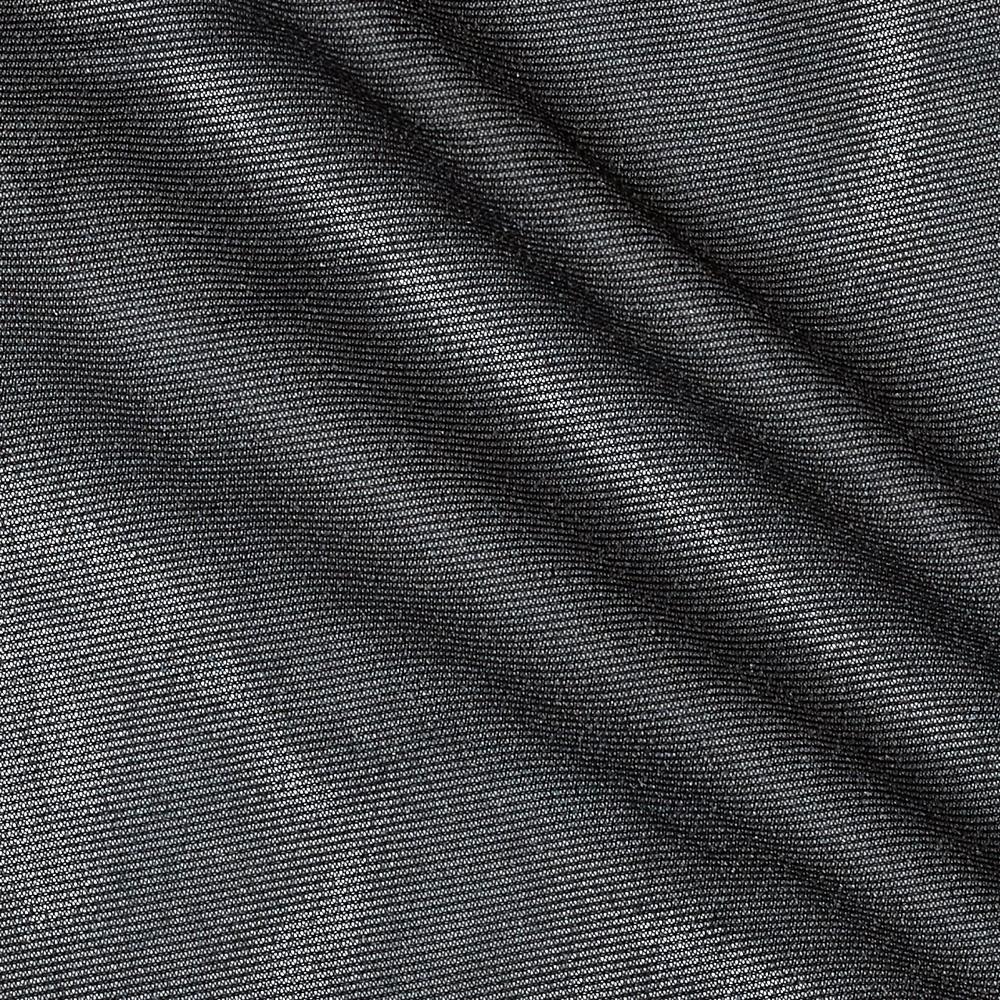 Fusible tricot, which has a two-way stretch – unlike regular interfacings. Source: fabric.com

You will use interfacing in collars, cuffs, lapels, facings and waistbands. It’s sometimes used as a de-factor stabilizer, as well, providing strength as well as body to button plackets on dress shirts and such.

Interfacings come in a variety of weights, from extremely light-weight to heavyweight. As a rule, use an interfacing that’s the same weight as the fabric you’re reinforcing. A light-weight fabric requires light-weight interfacing. You’re going to think that it can’t make much difference, but it will. If you’re unsure, practice with some scraps to get the hang of how interfacing can affect a fabric. (This is why a lot of sewists stubbornly hang on to scraps – they’re great for testing new glues / techniques / stitches.)

Which interfacing to use depends on the purpose of the garment and your budget. A cheap blouse might use some fusible interfacing to reinforce the cuffs. A bespoke suit is going to use a fair whack of hair canvas or other woven interfacing to build up the jacket’s front, sometimes several layers.

The most common brand of interfacing in the USA is Pellon. You’ll find it at every fabric store, usually on a 24” bolt. Pellon interfacings are color coded to indicate weight and whether it’s fusible or sew-in, so use that as a guide when shopping. Pellon always comes with instructions on how to apply it to your garment – very handy for forgetful sewists like me!

One caveat with fusible interfacing: once you fuse something to your costume fabric, you will change how it drapes. You’re gluing your woven fabric – which has a grain to it running parallel to the warp – to something that isn’t woven at all and locking your fabric down in one state.

Really, it boils down to if you’re looking to re-create a sumptuous, bespoke look with your costume, stay away from fusible interfacings – just as the bespoke tailors do.

Another warning: don’t make the newbie mistake of trying to turn a lightweight fabric into something heavyweight by fusing it to heavy interfacing. If you want to add some serious oomph to your fabric without losing the grain, flat-line it.

I once had to make a costume in a big hurry with a very tiny budget and ending up trying to build a futuristic military uniform from floppy two-dollar-a-yard cotton. In desperation, I added fusible interfacing from top to bottom, trying to get a flimsy fabric to impersonate the body and drape of a wool blend. It didn’t work. I didn’t know about flat-lining at the time, alas.

Interfacing is one of those things that you’ll build up a stock of in your sewing corner and turn to frequently. Pellon starts at around two dollars a yard for lightweight and goes up to six or seven dollars a yard for heavy and extra-heavy weights. Keep in mind that you’ll rarely need more than a yard for a project, because you’re only using it in small areas. Nor do you have to worry about cutting non-woven interfacings on the grain, so you can maximize your usage by laying out the pieces as close as possible to each other, any which way. When sewing interfaced fabric, use whatever needle and thread are appropriate for the surface fabric.