What’s the difference between a bodice, a corset and stays? About 400 years. (rim shot)

These terms often get thrown about interchangeably, but they shouldn’t be. Here’s why:

Historically, the first term used to describe a supportive undergarment, stiffened to some degree by reeds, was a pair of bodies, or bodies for short. It was referred to as a pair because the garment was two pieces, laced together at the sides. The outerwear garment worn atop was also referred to a pair of bodies or bodies, from which the word bodice derives. More about the bodice, below. 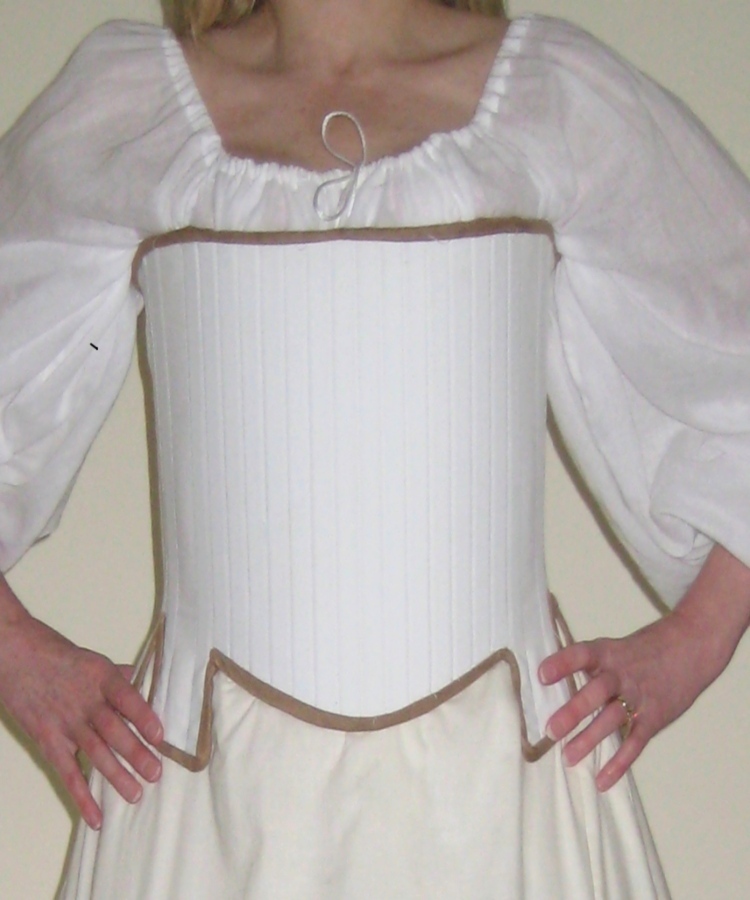 Woman in a classic Tudor corset. As you can see, waist-cinching is NOT the point. Source: tudortalkandcatwalk.com

90% of us would just call the garment in the first image a Tudor corset and be done with it. But people at the time are now calling this stiffened support garment a pair of stays, or stays for short. It’s speculated by historians that the term derives from the French estayer which means “to support”. Makes sense, and proves that the French have been the trend setters for ages.

In historical usage, there is some overlap between bodies and stays because nothing changes overnight, especially in the pre-Internet age.

The term stays remained in English vernacular through the mid-19th century. And just to make things more confusing, the word stay can also refer to the boning (reed or steel) inside a garment.

Then there are jumps – a garment that is more lightly boned than a pair of stays and which laces in the front, thus making it easier for a woman to put on and take off, especially if she doesn’t have a domestic servant to help her dress. Jumps, however, should not be confused with bodices. Jumps are underwear, bodices are not. More about bodices, below.

The term jumps declines in usage towards the end of the mid-18th century – although the structure and function is largely picked up by the corset.

Of course, as with bodies and stays, there wass some overlap in the usage of the terms jumps, stays and corset – and it looks as if how each term could be applied is the subject of some fairly fierce discussions among historians…

The current vernacular is to use stays to refer to any boned undergarment from the 17th and 18th centuries, and corset for such garments from the 19th century, onwards.

The word corset derives from the Old French word corps, which means body. The term first appeared in English in the early 19th century. When introduced, a corset was an unboned (or very lightly) boned linen garment that laced up the front. They were less built-up than their sibling garment, stays. These early corsets were suitable for casual wear and for wear by pregnant women. Over the course of the 19th century, as fashion changed, the corset changed to keep up with it, evolving into the back-laced, front-busked item we know today.

So what about bodices?

Historically a bodice was an external garment, covering the body from neck to waist. Just to make things super-confusing, it too was referred to as a pair of bodies for the same reason that the reinforced underwear was: it was a body garment, made in two pieces and laced together. The word bodice has been in use since at least the 16th century.

The historical bodice can have boning of its own, or be worn over a boned undergarment (which would be called a pair of bodies, stays or corset depending on the period). Around 1620, it became more common to integrate support into the bodice, which dispensed with the need to wear separate stays beneath it. However – just to make things more confusing – stays crept back into popular usage by the end of the 1600’s.

Unlike the underwear mentioned on this page, the meaning of bodice remains largely unchanged today. It refers to the upper part of a dress comprising of the torso and sleeves, whether it’s a separate piece, or sewn to the skirt. It remains strictly outwear.

To sum up: if it’s reed or steel reinforced underwear from the 1600s – 1800, call it stays. The same thing, dated after 1800, call a corset. If you wear it on the outside, call it a bodice. You won’t be 100% accurate, but only a costume historian will argue the difference. 😉