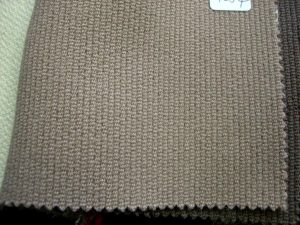 AKA Bedford cord. Physically resembles corduroy, although the ridges aren’t as pronounced. Unlike corduroy, the ridges in Bedford cloth are woven in; they are not a cut pile.

The vintage version was tough and hard-wearing, and acquired its name when used by the Duke of Bedford to outfit his soldiers in the 15th century.

Lizzie Borden made it briefly infamous as she supposedly wore a Bedford cord dress while she killed her parents.

Still in use today, generally as upholstery fabric and men’s casual shirts. Historically, it was made from worsted wool. Today, fiber content varies according to purpose – cotton or cotton-polyester blend for clothing, various synthetic blends for upholstery.

A good-enough alternative is, obviously, corduroy.