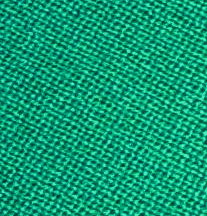 Baize is a dense, plain-weave wool cloth, traditionally used as a surface for gaming and pool tables. It’s usually green, but it can be found in other colors (red is a popular alternative).

A lot of fabrics will be described by sellers as baize simply because it’s green and fuzzy, which can be vexing. Authentic baize is made from 100% wool, tightly woven, and with a slight nap to the surface. That nap helps keep cards and game tokens in their place on a table, and it affects how a ball rolls across it (see my note about snooker, below) Baize isn’t as fuzzy as felt or melton.

Since I grew up in a country that plays snooker, I feel obliged to point out that baize is not used on snooker tables, because baize has a slight nap to the surface, which affects how the ball will roll. Snooker purists can get very cross when their table surface is referred to as baize. Ironically enough, the fabric on a snooker table is billiard cloth.

Baize isn’t not something I would use for costuming. Genuine, good-quality baize is expensive. The cheapest I could find a listing for was nearly $40/yd and I saw prices over $100/yd from some suppliers. It’s only available in a limited palette – red, blue and green are the only colors I’ve seen for pure wool baize. And it would be really, really warm to wear.

I’ve seen “decorator baize” – usually a blend of wool and some synthetic fiber – in a broader range of colors, but it’s also even more expensive, starting at around $60/yd.

If you find a seller offering you “baize” for less than $35/yd, you’re probably buying felt – and it might not even be pure wool, at that. For casual use, felt might be all you need, but it won’t last as long or look as good as the real thing.

It’s a great décor fabric for the express purpose of surfacing gaming tables, but not a good choice for costuming – unless you’re dressing up as a pool table. 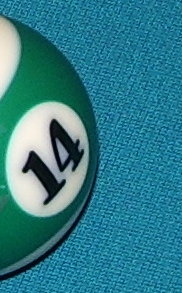