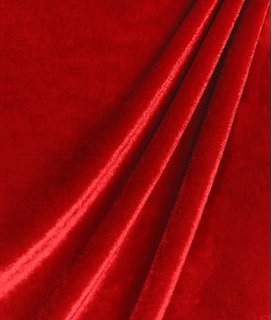 Velvet. Epitome of luxury. A de-rigeur fabric whether you’re costuming Game of Thrones, Lord of the Rings or even certain Doctor Who characters. Velvet is ubiquitous.

Wikipedia puts it pretty succinctly: Velvet is a woven tufted fabric in which the cut threads are evenly distributed with a short, dense pile. In other words, it’s fuzzy on one side. The fuzzy part is the pile, and what it’s attached to is called the ground or, more casually, the base.

Velvet is a napped fabric. That means when you brush your hand along it, it can look lighter or darker, depending on how the light is hitting it. The short tufts change the direction they’re lying in and that changes how it looks.

The difference between nap and pile. 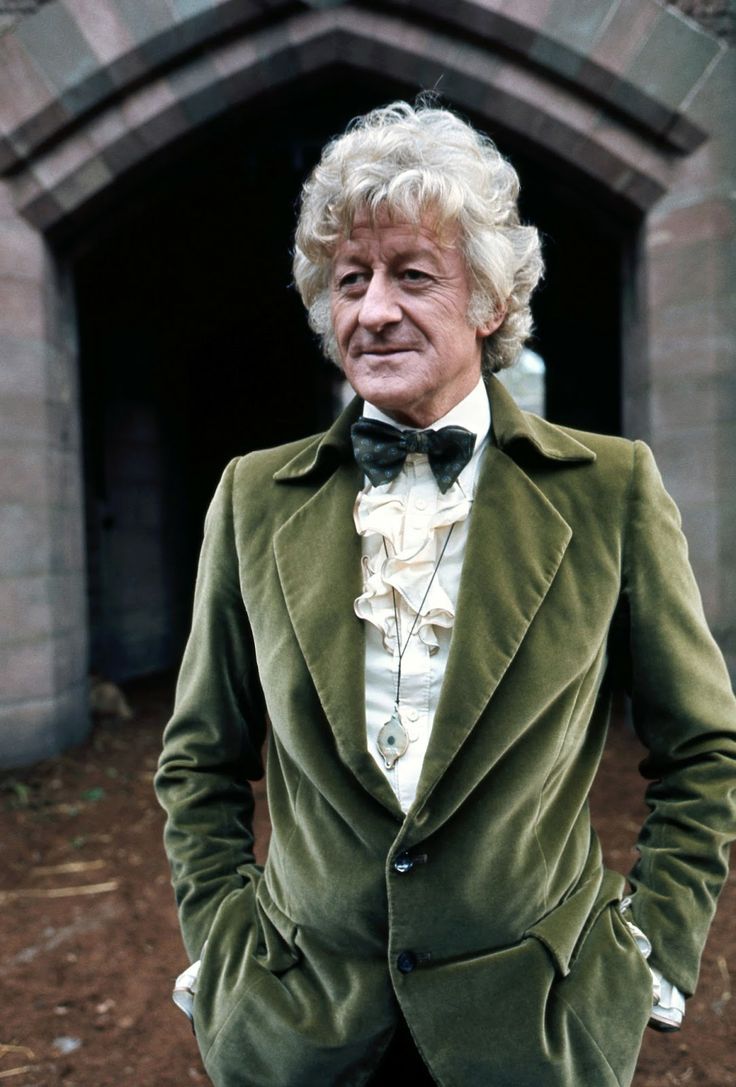 The 3rd Doctor in one of his fabulous velvet jackets. Source: BBC

The word velvet is often thrown around to refer to velours and velveteens, as well. So let’s clear that up right now.

Velvet does not stretch. That would be velour. Velour usually has a shorter pile than velvet, too. It’s sometimes called “stretch velvet”. Velour is not velvet.

Then there’s velveteen. Strictly speaking, velveteen is only made from cotton, but that’s no longer true, these days. The main difference between velvet and velveteen is that velveteen has a shorter pile – the fuzz isn’t as, um, fuzzy.

Both velveteen and velour will get their own loving treatment elsewhere in the series, so that’s all I’m going to say here for now.

Velvet can be made from many different fibers, but the most popular choices are polyester, acetate and rayon. What about silk? Stick with me, we’ll get to that.

At the cheapest end of the scale is polyester velvet. It’s about $8 yard. It’s very shiny and it’s very warm because not only does that lovely fuzzy stuff keep the heat in but, hello, it’s polyester. It’s plastic. The hand can be kind of stiff and it doesn’t drape as well as triple velvet or rayon velvet. But it’s the cheapest option out there – great for kid’s costumes, or something that risks getting dirty but you won’t cry if the dry-cleaner ruins it.

Triple velvet is a nylon-acetate velvet that has a plusher feel than polyester velvet. I consider this stuff one step up from polyester velvet, and it only costs a dollar or two more per yard. 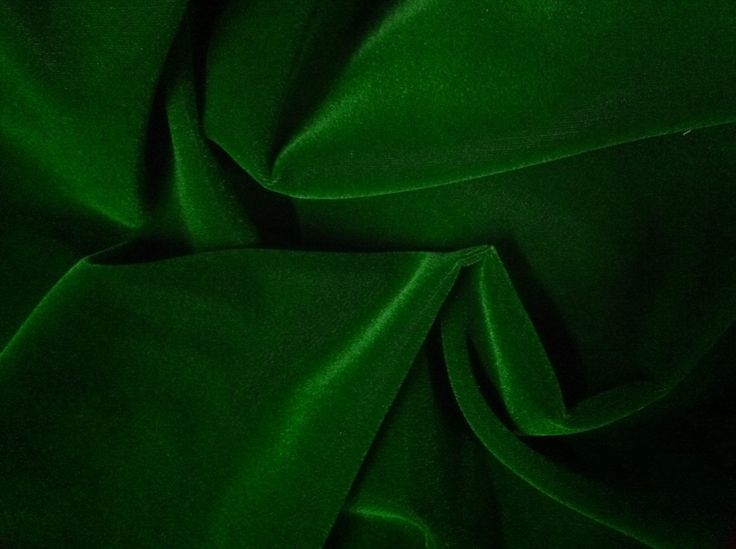 Nearer the top of the scale, we have rayon velvet. Sometimes it’s pure rayon and sometimes it’s a silk base with a rayon pile. It has a much more fluid drape than either polyester or triple velvet. The pile feels softer, too.

Because rayon velvet sometimes uses a silk base, you will often find it billed as silk velvet. Technically, that’s true. There is silk involved. But the piece isn’t pure silk. Rayon-silk velvet will cost you about $25 a yard. Real silk velvet – 100% base and pile made of silk – will cost you… do you want to guess? Go ahead, I’ll give you a second. 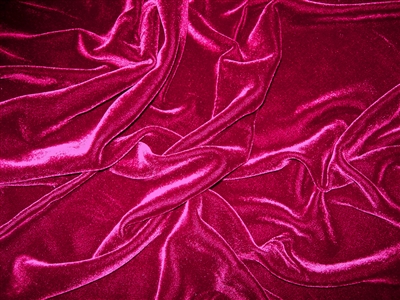 Real silk velvet will cost you around $300 a yard. To start. I once encountered some at Britex in San Francisco, and I was afraid they were going to charge me for looking at it too hard. Actually, that stuff was $450 a yard because it was hand-painted for a couture designer’s project. Ow. And I left eyeprints all over it!

I’ve seen some ebay sellers get really weasley about “silk velvet”. One day, I was feeling ornery and I contacted one seller with an email along the lines of gee-whiz, that’s a great price. Is it really a pure silk fabric? Their response – yes, the fabric is pure silk. And then, buried about three sentences later, a quick mention that the pile was rayon. But the actual woven part of the piece? That was silk. Therefore, silk velvet. Sigh. So don’t believe everything you read on ebay.

If you want to make a high-end gown, something that looks like it belongs on a member of a royal family or a seriously well-dressed elf, rayon velvet is what you want. I’m going to give a shout-out here to Silk Baron as a great online retailer for rayon-silk velvets, silk taffeta and silk dupionis.

Okay, so that’s the basics of velvets covered. But wait, there’s variants on a theme to learn about. 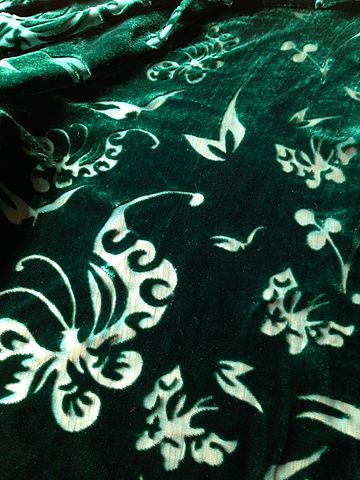 Burnout velvet is velvet that has had the pile chemically removed from certain places to create a pattern. The chemicals quite literally burn the pile away, once they’re applied to the backing of the velvet. Burnout velvet can make for striking shawls and embellishments, and looks really neat when laid over a fabric with a contrasting color. If you’re feeling brave, Dharma Trading has a great tutorial online about how to do it yourself.

Embossed velvet is pretty much what it sounds like. The pile is crushed with pressure and heat to create a pattern. Embossed velvet is another effect you can do at home with a steam iron, a rubber stamp and some practice. Just be sure to use rayon velvet, not polyester or acetate. 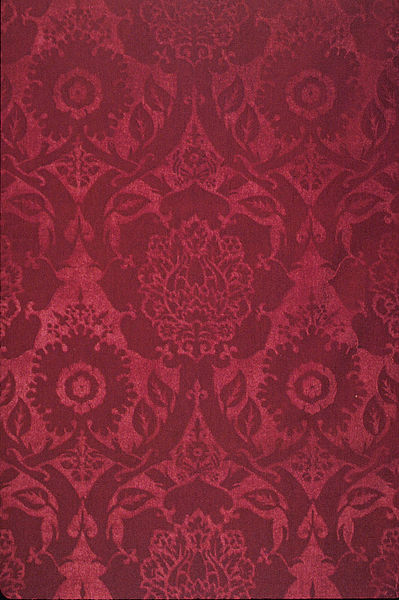 And finally, there’s upholstery velvet – which is actually closer to velveteen in texture. The most significant difference, though, is that upholstery velvet has a much heavier and stiffer backing than garment velvet, in order to allow the stuff a chance to survive being used on furniture. It’s too heavy for the usual garment choices – capes and dresses and such – but it can be really fantastic when building monsters or costumes that can use that structure and stiffness to its advantage. Be sure to let it ‘outgas’ for a few days before cutting it, though – like many upholstery fabrics, it can be a bit whiffy at first. 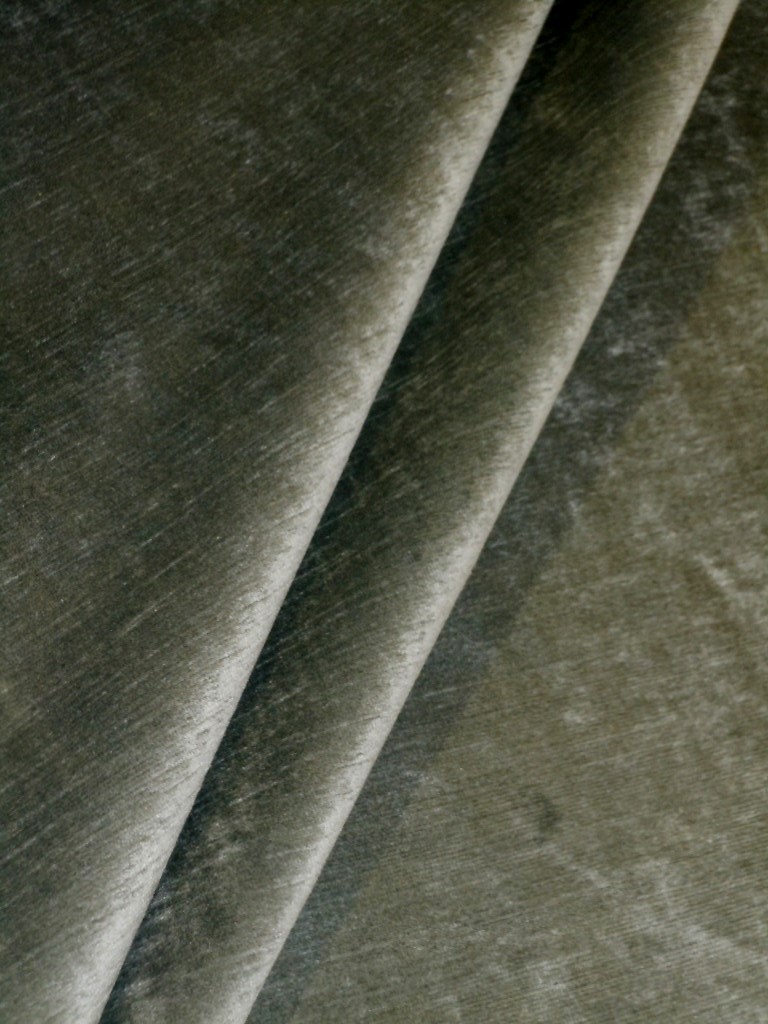 Velvet is a tricky little devil to cut and to sew. Very tricky. And that’s a shame because it’s such a go-to fabric for cosplayers.

When cutting it, use lots of pins to hold your fabric and your paper in place. That nap means that the fabric just loves to creep around all over the place – even when you’re in the midst of cutting it. I find it’s easier to use a rotary cutter than scissors.

Don’t forget to pay attention to the nap when you’re cutting. You want every piece you cut to have nap going in the same direction. If you’re using a commercial sewing pattern, the instructions should include a guide on how to lay the pieces out. Pay attention to it!

You don’t want your garment to look multicolored because you cut your sleeves in a different direction from each other. Ugh. Always follow the directions for ‘with nap’ when cutting.

When it comes to sewing velvet, you want a walking foot. If you can’t afford one and don’t have access to a loaner, consider a rolling foot as a compromise.

Whatever foot you use for sewing, use a lot of pins when putting your cut pieces together for sewing. Yes, that means you’ll have to stop pretty often to pull them out before the fabric goes under the machine’s needle, but it’s better to go slow than to rush through things and get wonky seams – or bust your machine’s needle when it hits a pin. Cotton or polyester thread are fine. Use a small zig-zag stitch when sewing velvet and sew in the direction of the nap. 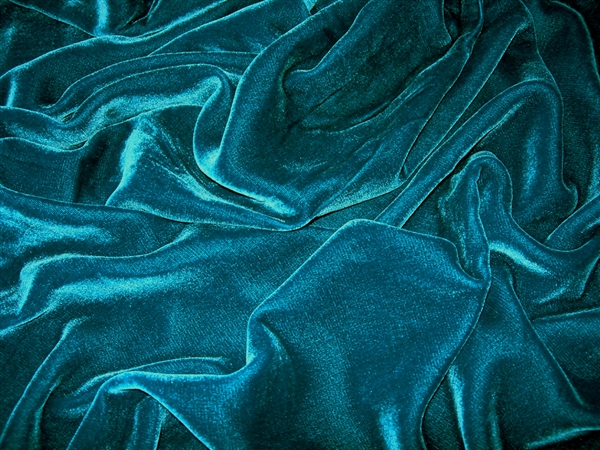 Another hazard of sewing velvet – yeah, there’s another one – is the fuzz. That fuzz gets everywhere when you’re cutting it and when you’re sewing. It piles up and accumulates around the head of your machine and inside the bobbin case assembly, too.

Every couple of hours, take a break and clean your machine out. Use a soft brush and brush out any fuzz clinging to the bobbin case and the business end of your machine.

Do NOT use canned air, as that’ll just blow fuzz farther inside your machine, possibly beyond your reach to get it out. And before you ask me “What does it matter if a bit of lint gets inside my machine?” let me warn you that a bobbin case full of dust bunnies can lead to dropped stitches and messed up thread tension. I’ve even had threads snarl and break on me because of dust bunnies in my machine.

Velvet is a real drama queen when it comes to being taken care of. It must be dry-cleaned. The only exception is if you’re using cotton velveteen and that’s not actually velvet (it’s a velveteen).

And you don’t want to let it get crushed. We’ve all seen what happens when you pack up from an event in a hurry and toss a skirt into the bottom of your suitcase rather than keeping it on its hanger. Sadness happens.

Now, true, some people want this effect and they even buy it that way. It’s called crushed velvet or sometimes you’ll see it called panne velvet. (And if it stretches, it’s panne velour)

But what if you don’t want your fabric to be like that? What do you do when your velvet gets crushed?

Well, you can do what I’d do, which is to have a little cry, make a cup of tea and decide if I can convince people that I did that deliberately. I’m not joking.

Or you can hang the piece on a garment or on your dress form, borrow a garment steamer from someone and sit down with a brand new toothbrush and a lot of patience. Steam the garment and use the toothbrush to brush against the direction of the crushed pile. Sometimes – sometimes – you can save a crushed pile. 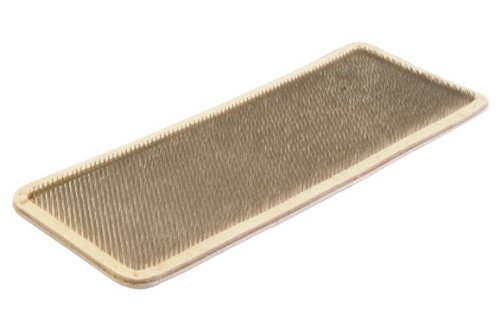 You lay the piled side of the fabric against the pins and use as cool an iron as possible against the base to press it. The pinboard – a teeny-tiny bed of nails if you will – allows you to put pressure on the fabric without crushing the pile.

Unfortunately, pinboards aren’t cheap, either. Don’t even think of going to JoAnn’s to buy one – assuming they have one – unless you have one of their 50% off coupons in your hand. The full retail price on one is a little over a hundred dollars and they’re really quite small. Like, about half the size of a piece of notebook paper.

I’ve seen velvet boards on Amazon for about the same price, but those guys never offer coupons, dang it. Dritz offer a pinboard for about $40, but it doesn’t inspire confidence. The pins seem to be about half a densely scattered as the pricier version and I’ve only seen bad reviews for it. If you’re going to drop the cash on such an item, go for the quality.

Some friends of mine have reported limited success pressing velvet and velveteen by laying it down on a thick fluffy towel and using more steam than actual pressure. I haven’t dared try that approach, myself but if you don’t mind the risk of disappointment and the certainty of towel lint all over your velvet, you can give it a try.

I really hope all this hasn’t scared you away from velvet. It’s a wonderful fabric and one of a kind. You’ve just got to be careful! 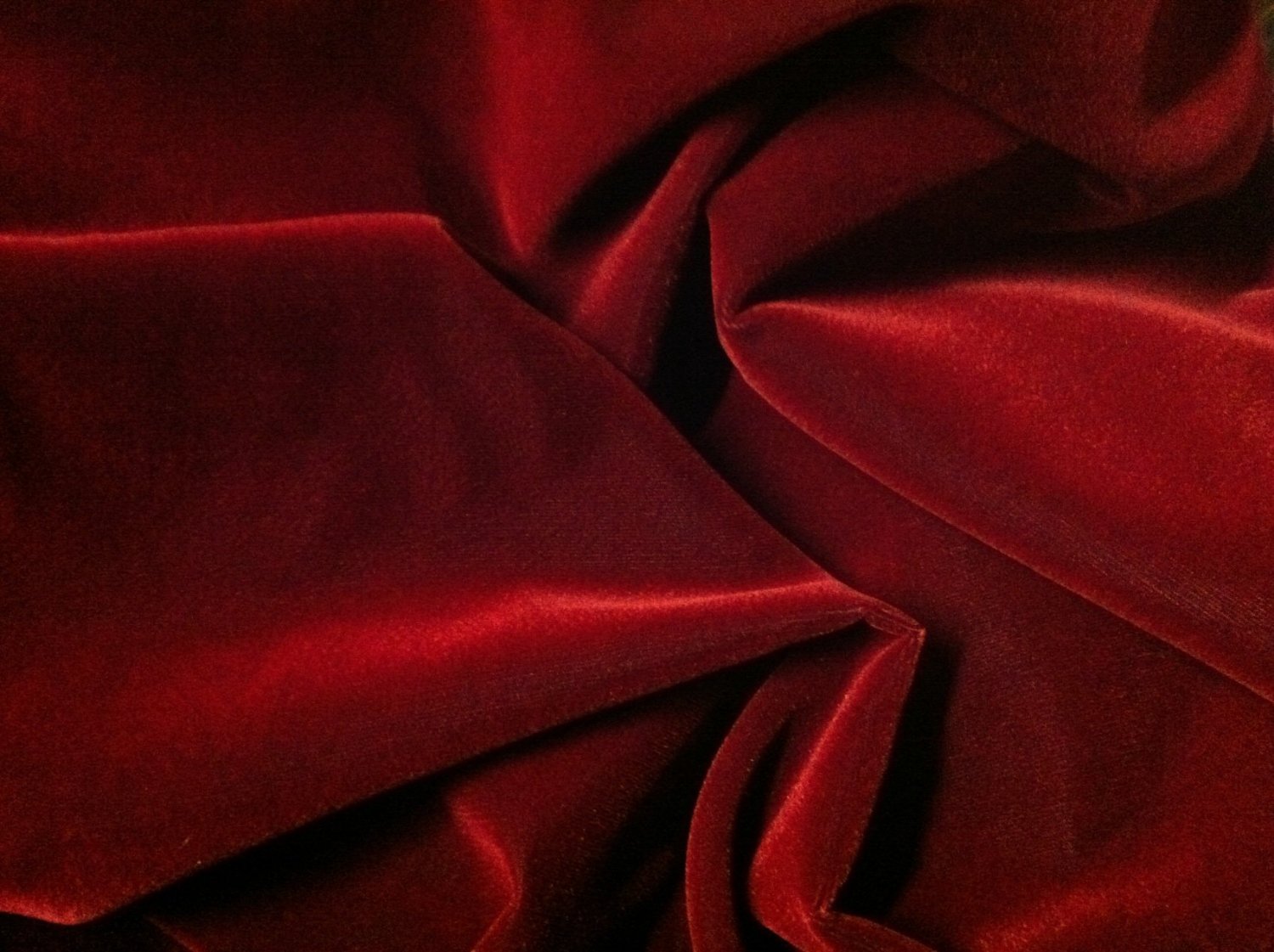