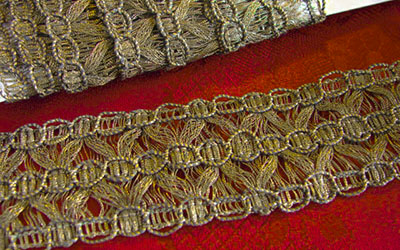 Passementerie is a French word describing a certain type of trim. Usually, it’s braided and features metallic yarns. It can range from quite narrow – a quarter inch – to over an inch wide. Narrow passementaires can also be referred to as braid, soutache (although that’s not really the same thing) and gimp (ditto).

In a nutshell, if it looks like it belongs on a military uniform – or the gear of any rock band circa 1983 – it’s probably passementerie. The purpose of passementerie is to invoke wealth and opulence. It adds to the cost and construction time of a garment and so it’s automatically a status symbol.

If you’re doing anime cosplay or military recreation, you’re going to get very familiar with fancy trims such as these.

Cost can vary by width and by yarn used. Back in the old-old days, a military officer’s gold braid really WAS made out of gold – every fan of the Hornblower books remembers Horatio’s shame at having to buy gold-plated brass for his first epaulette – but gold is far too pricey for all but the most egomaniac of tinpot dictators, these days. 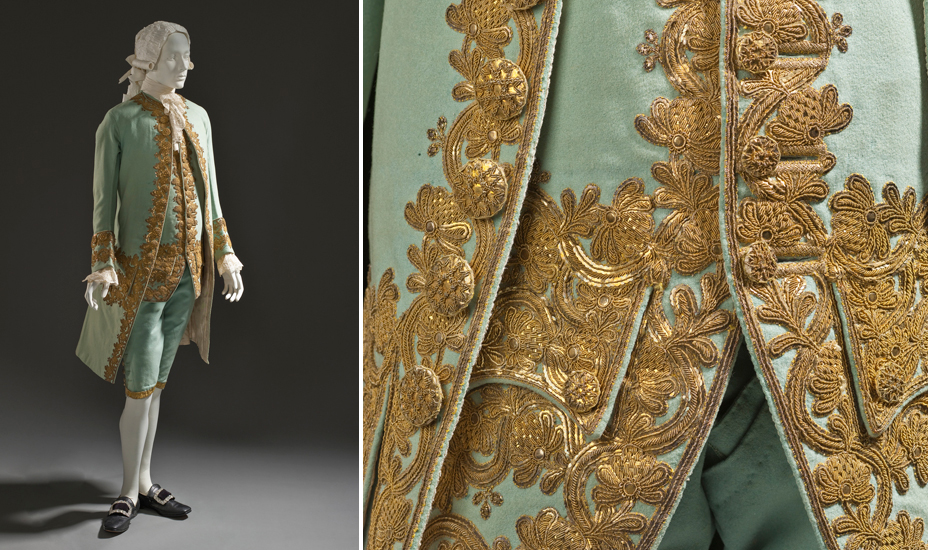 A narrow metallic braid might cost four or five dollars a yard. A seriously fancy piece of work, over an inch wide and using a lot of metallic thread, can easily cost thirty dollars a yard. A modestly trimmed jacket might require as little as three yards. But if you’re going for the Sergeant Pepper’s Lonely Marching Band look or cosplaying Hetalia, you’ll need as much as ten or fifteen yards. 19th century cavalry, where you can barely see the basic fabric for the piping on top will need dozens and dozens of yards of narrow soutache. Dozens.

Now for the really bad news. You’re going to have to sew this on by hand.

Alright, alright, if you’re making a costume that’ll only be seen on stage or from more than ten feet away you MIGHT be able to machine-sew it on. But when you’re paying a small fortune for fancy trims, why distract from it with visible stitching? Furthermore, if you’re using a bulky trim, it’s possible that it’ll be too bulky to get through your machine.

More bad news, most passementaires are NOT washable. Most of them aren’t dry-cleanable either, as the faux-metallic threads are, in fact, plastic and will dissolve or degrade on contact with dry cleaning chemicals. There’s nothing worse than spending a couple hundred dollars on embellishing your costume, only to watch it change color – or worse – when you take it to a cleaner’s. You definitely do NOT want to sling your heavily-embellished anime coat into the washer, obviously, as the agitation will crumple and maybe even break the trim. The best approach for cleaning a heavily embellished costume is to spot-treat any stains and hope that Febreze and sunlight will keep it smelling sweet.