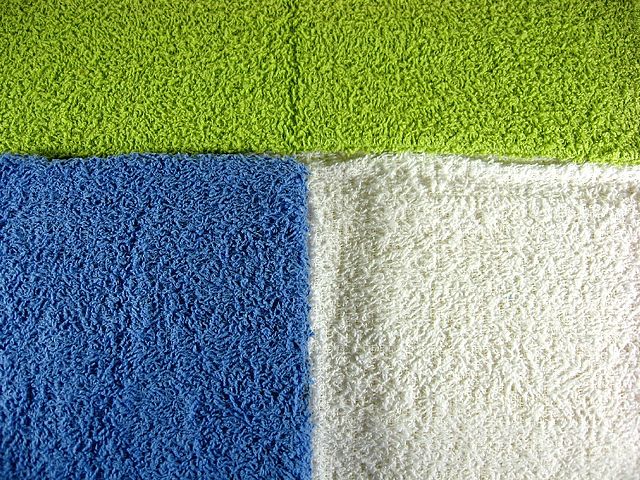 Terrycloth is often called toweling because that’s a primary use for it: towels and bathrobes. It’s also great for muppets, monsters, mascots and other things that might or might not begin with “m”.

The big difference between terrycloth and, say, velvet is that terrycloth features a looped pile, instead of a sheared pile. Because the primary purpose of terrycloth is to absorb moisture, you want as much surface area as possible to dry you off with. Don’t believe me? Try drying yourself off with the velour blanket on your hotel bed the next con you’re at and see how far you get. Yuk.

Of course, that velour blanket isn’t going to get you very dry for another reason. Hotel blankets are usually polyester or a blend of artificial yarns, whereas terrycloth is almost always cotton. Cotton is more absorbent. It’s also more comfortable to wear.

Terrycloths can vary a fair bit in terms of density and length of loops, so if you’re making a monster costume for a wee’un in your family, shop around. And if you are making a costume for a little one, stick to cotton rather than microfiber. It’ll be cooler on the kid and cheaper to buy. Microfiber is great at wicking away water and sweat, but it costs more than cotton terrycloth.

Terrycloth has a pile to it, just like velvet, so always use the “with nap” cutting layout when using a sewing pattern. The easiest way to cut terrycloth for a pattern is with a rotary cutter and mat.

(Learn about the difference between nap and pile.)

It can unravel quite a bit when it’s cut, so be prepared with your fray control method of choice. You’re also going to want to finish the seams in some fashion, otherwise you’ll have lots of little bits of terry cloth all over you after you wear the garment.

Cotton and microfiber terrycloth can be washed in a machine on cool – although if it’s pure cotton, you can wash it with warm water – hot if it’s pure white or unbleached. Pure cotton terrycloth will shrink as much as ten percent, so you want to buy more than the recommended yardage – an extra quarter yard for every two yards needed – and run it through the washer and the dryer TWICE before you cut it for your costume. It can go into the tumble dryer on low. Like velvet, you don’t want to subject it to an iron. As it’s practically impossible to crease, you’re not likely to want to.

Terrycloth can be vexing to sew, because your needle will get caught on fabric loops. Use a regular needle, but lengthen your stitch and if your cloth is particularly bulky, break out the rolling foot. And, like velvet, terry is going to drop a lot of fuzz inside your machine, so take frequent breaks to brush the fluff out of your machine’s guts. Use cotton or polyester thread.