This is meant as a quick-and-dirty overview for newbie costumers. If you want to get into the nitty-gritty, check out the resources page for some good places to go.

For women, there were three major fashion movements through this period: early bustle (early and mid 1870s), natural form (late 1870s through early 1880s) and late bustle (early 1880s to 1890). As you might have guessed, the natural form period was a time when bustles (briefly) went out of fashion. Bustles were the steely successor to the bumroll of earlier fashions and while you might find the idea of spring-loaded underwear a bit intimidating, they’re actually kind of fun to wear 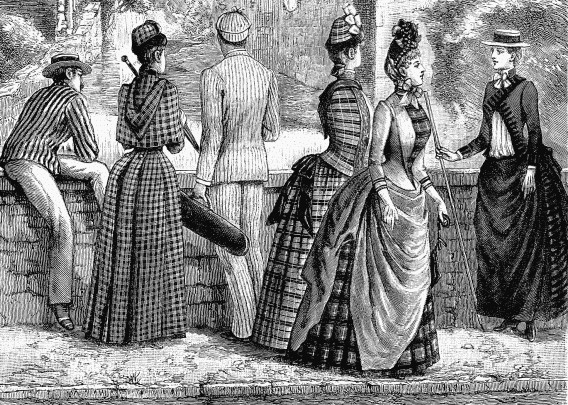 The female silhouette changed from a uniformly wide skirt (the hoopskirts of the US Civil War era) to narrow, straight skirts, with volume in the back provided by an artfully arranged overskirt, sometimes containing a significant amount of fabric – evening gowns would trail on the floor. Small waists were fashionable and the ladies still worse overbust corsets, tugging more tightly on the waist laces than previously, although a large bustle could be employed to help fool the eye.

Dress bodices were fit very snug and close to the body, and sometimes the top part of the skirts would be fit tightly across the hips and legs. Necklines were high during the day, lower at night. Sleeves were similarly modest – full or elbow length during the day, short or entirely absent (in off-the-shoulder styles) at night.

With the increased availability of home-sewing machines, home-sewing became quicker and easier and ladies used that time saved going to town adding embellishments of all kinds to their gowns – pleats, ruffles, tassles, lace, beaded trims and everything else under the sun, all of which had become cheaper because of mass production. Anyone could afford a lace trim to their gown, if they didn’t mind it not being hand-made. 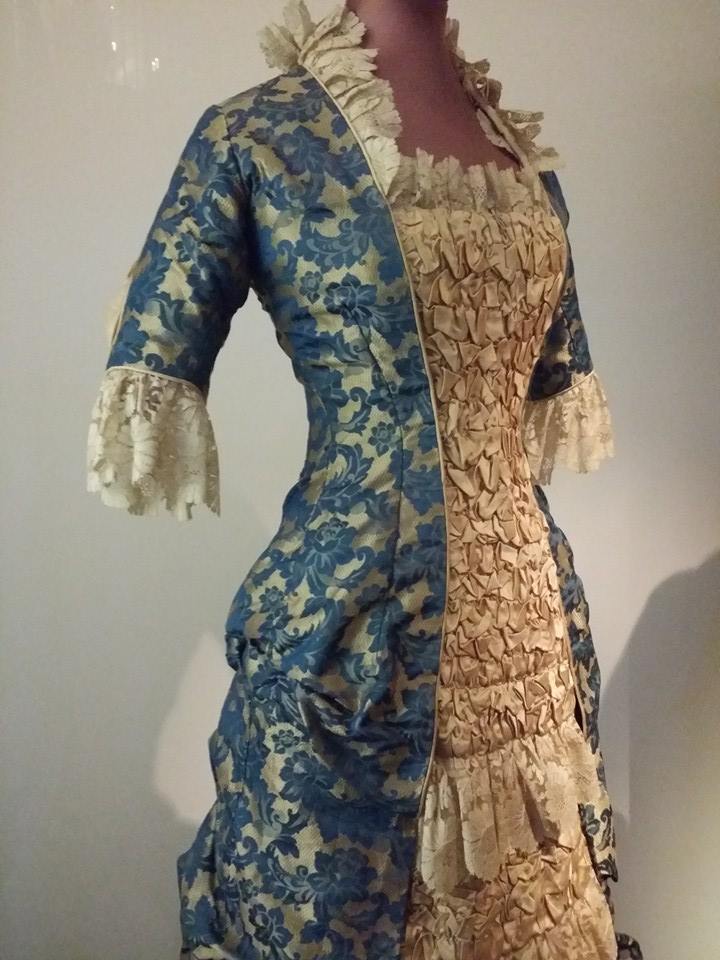 During both bustle eras, skirts were supported with a combination of a bustle and crinoline petticoats.

In the later bustle period, the silhouette was curvier (presaging the Edwardian S-curve), rather than the almost apron-like front of tight skirts and bodice. In the illustrations I’ve seen, bustles appear smaller and less exaggerated, but that’s an entirely informal observation on my part. Towards the end of this period, the emphasis on (and desire for) a tiny waist was at it’s most extreme. This is where tales of ladies trying to corset themselves to an unhealthy degree originate.

As usual, the gentlemen had a more sedate time of it. Long straight trousers remained in vogue. Shirts had upright collars (some with the tips pressed outwards, the ancestor of what we recognize as a shirt collar, today) and were worn with neckties that more resembled ascots than what we’d call a tie today. Vests were cut straight across the bottom and could feature a variety of collars (shawl collar, notched lapel, double-breasted front, etc).

The morning coat has established itself as acceptable daytime wear (originally limited to, you guess it, the morning). Frock coats were still the thing for formal daytime wear, with lapels creeping a bit wider and the front closure moving lower with the passage of time. Evening formal wear featured a tailed coat (but not in the cutaway style). The trend for colorful printed shirts in the daytime withered completely and the overall palette became more somber. But before you think the gents got completed cheated out of a good time, I should mention that PLAID PATTERENED SUITS were often a thing – albeit for informal wear. How awesome is that? 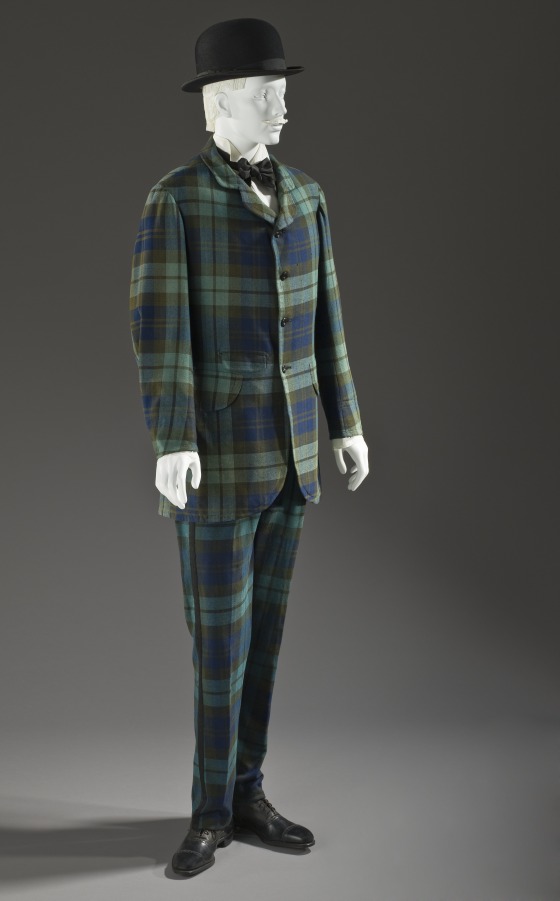 Hats were worn by everyone when outside. Top hats were relegated strictly to formal wear, while softer hats take their place in the day time. Ladies hats varied so much that I’m going to suggest you go here instead of my trying to summarize it.

Rayon, the first artificial fiber, went into commercial production in 1889 but they didn’t come into common usage until after 1900. Acetate was invented in 1893, but not employed as a fiber until 1924. Natural fibers were still the way to go.

People still enjoyed bright, aniline dyes although the initial thrill had ebbed somewhat – especially for men, who were mostly relegated to somber colors. Printed fabrics in all fibers were very popular, because they were colorful and affordable.

Cotton, linen and wool saw a lady through the daytime. If she was rich, she’d don silk taffeta or satin at night. A type of coated cotton called chintz was an affordable “fancy” fabric.

Cotton velveteen has a period of being in vogue towards the end of this period, as do other textured fabrics, such as damask.

Men’s suits were wool and wool blends. Shirts could be linen or cotton.

Moiré patterns (a wavy faux-watered silk effect) were particularly popular in the late 19th century. I’ve got some two-tone green-red moiré that’s crying out to be made into a bustle skirt, as the folds of the fabric will really show off that cross-woven effect.

The 1880s see the kickoff of the Art Nouveau movement and it influenced everything, including fabric printing. William Morris had his A-game going. Charles Worth pretty much invents the idea of haute couture during this time, but he didn’t eschew the ready-made market, either.

So, What Can You Use?

Fabrics appropriate to the late-19th century are wonderfully easy to acquire, if not always affordable. If you want to be particularly accurate, do closer research on patterns and fabric yarns for your chosen decade. Fashionable tastes could – and did – change rapidly during this time, so an afternoon browsing reputable reference sources is time well spent.

You can save money by substituting blends for pure natural fibers but, as ever, you have to find the line between affordable and clearly-synthetic. Wool blends that lean too heavy on the synthetic fiber can be a challenge to sew (it’ll be more resistant to taking a crease) and doesn’t hang on the body quite the same way pure wool does.

I don’t feel guilty in the slightest when I use acetate and even polyester taffetas in a Victorian rig. They’re a great choice for evening-wear and very affordable.

Nor do I feel guilty using acetate velvet (aka triple velvet) when there’s no room in my budget for silk-rayon velvet.

Cotton velveteen is great stuff and quite affordable. I’d consider a synthetic substitute to be a false economy.

Better-quality synthetic satins are a viable option, but beware of looking like a Disney princess.

I’ve never resorted to a crinoline petticoat with my bustle. Simple, ruffled petticoats from medium-weight cotton have always worked for me (another use for bedsheets from the thrift shop!)

The upholstery section is your friend for this era. You’ll find pintuck taffetas, awesome decorative prints and interesting jacquards by the ton. If you shop smart with coupons and whatnot, you won’t break the bank, either.

Flat-line lighter-weight fabrics to push them up the socio-economic scale, although you can only go so far with that – voice of experience, here.

Stay The Hell Away From

Cheap costume satins. You might be able to save them with judicious flat-lining, but I’m not a fan of that material, unless you’re cosplaying an animated character. (Yeah, my prejudices are showing)

Polyester velvet. This is another fabric that I prefer to restrict to kid’s costumes and animated cosplay. It’s just so shiny.

Neon colored anything. Yes, artificial dyes existed, but they hadn’t gotten around to fluorescents yet.

Unless you’re cosplaying a manual laborer, you can’t wear denim pants just yet.