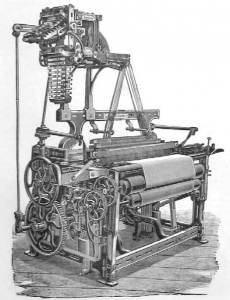 (I realized about three days after the site launched that this entry was necessary. Mea culpa – Ed.)

To keep it simple, a fabric’s finish is what happens to a fabric once it comes off the loom. How big a deal is it? Batiste and organdy begin life as the same greige goods and organdy only becomes such after being coated with starch (or, these days, dipped into a chemical bath with the same purpose).

Back up. Greige goods? That’s an industry term for fabric that’s come off the loom but has not been subjected to any finishing process. Pronounced grey. Some of my reference books spell it grey as well, and other books on my shelf insist that those books were written by barbarians. I’ll stick with the non-barbaric term, just so you don’t think I’m referring to the color.

Another example: fresh off the loom, chintz and calico are the same fabric – same yarns, same weave – but chintz is coated with a waxy finish on one side, and now can be told apart from calico.

Here is a short list of some fabric finishing techniques.

Calendaring – in which the fabric is run between heavy rollers (sometimes heated) to crush an existing pile, or to impart a smoother, glossier hand to the fabric. Bengaline and taffeta can be subjected to this process to create moiré. Some woolens are calendered to give them a smoother hand.

Coated – the fabric has literally been coated with another substance to add body, or to change the look of it. Chintz and cire are coated with a wax / wax-like substance. Organdy is stiffened with starch.

Brushing – a knit fabric (not a woven) is brushed on one or both sides to raise the fibers and make the surface of the fabric fuzzier – no directional nap, usually. The inside of a sweatshirt is an example of this. In case you’re wondering: the difference between nap and pile.

Devoré– aka “burnout” – a caustic chemical is applied to a fabric, dissolving some/all of the fibers. The results can be quite dramatic, especially if the burnout fabric is laid over a contrasting color. With devoré velvet, the pile is removed and the background remains.

Distressing / Weathering – the fabric is deliberately subjected to processes that will make it look worn and used, even before it’s cut for garments – stonewashed jeans and deliberately-distressed leather jackets, for example.

Embossing – whereupon the surface of the fabric is stamped, usually in a regular pattern. Can be done to pile and non-pile fabrics, but it’s most commonly seen on embossed velvet.

Fulling – a process in which a woven woolen fabric is cleaned and then beaten to felt the fibers, resulting in a stronger, warmer cloth.

Laminated – whereupon a substance is attached to a fabric’s surface, whether by heat, adhesives or both. Mirror lamé and many pleathers are laminated fabrics.

Printing – a color or pattern is printed on the fabric’s surface (as opposed to being woven in with colored threads). Challis is often printed.

Raising the nap – a woven fabric (not a knit) is mechanically brushed to tease up the outer yarns and make them fluffier. The extent of the nap varies according to the fabric. Some teased naps are left as is, some are sheared to the same length across the entire surface of the fabric. Felt is a napped fabric. And once again: the difference between nap and pile.