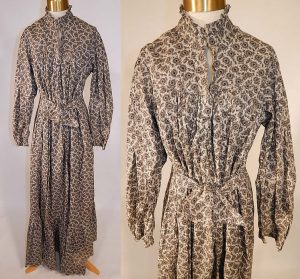 A plain-weave cotton, heavier than muslin and often featuring a printed pattern.

Just to confuse things, sometimes the print itself was called calico, so you’ll see items described as “calico taffeta”. But, usually, calico = cotton.

Very popular in the 19th century as the new synthetic dyes came on the market, as it was cheap to produce and took dye well.

Originally woven in a particular region in India, from whence it gets its name (Calicut). Imported calico was so popular in Britain that it was banned in the 18th century to protect the domestic industry.

Calico remains available today, and is still (usually) made from cotton.

If treated with a certain glaze, calico becomes chintz. Finished another way, it can become cretonne, and percale.