This is meant as a quick-and-dirty overview for newbie costumers. If you want to get into the nitty-gritty, check out the resources page for some good places to go. Oh, and you probably want to read why foundation garments matter.

The 19th century saw several major fashion trends which, for the sake of simplicity, I’ve chopped up into Regency, mid-19th Century and the late 19th Century. Yes, this is over-simplifying things by a lot, but you saw the disclaimer, yes? 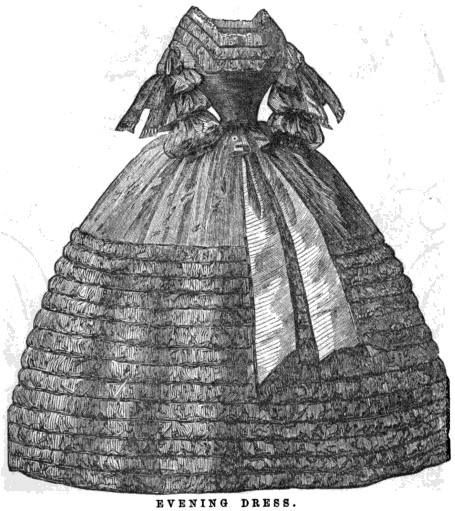 Gone With the Wind, the US Civil War, the Dickensian era – that all falls within the range of mid-19th century in that the fashions are very similar.

Fashionable ladies had a small waist and endeavored to achieve this via wearing large skirts (not by tight-lacing their corsets, sorry Scarlett). Skirts were supported first by petticoats and later by steel cages. Bodices were snug, but sleeves could be roomy and either worn open or gathered into a cuff. The shoulder seam – where the sleeve joined the bodice – was dropped from a natural position to further down the arm.

Lower-class / less fashion-conscious ladies still wore full skirts, but had to be able to get a day’s work done without tripping over themselves, so they shunned excessively wide skirts, delicate fabrics and expensive embellishments.

All women wore overbust corsets beneath their dresses. As mentioned, the small-waist effect was achieved with large skirts, but that’s not to say some women didn’t tight-lace, anyways. It wasn’t ubiquitous as historical fiction would have you think. 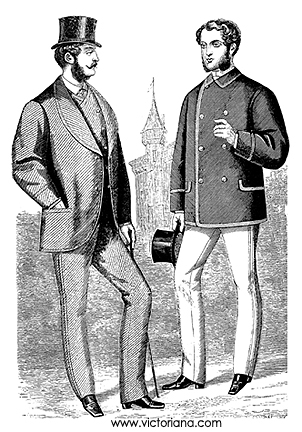 Gentleman wore long, straight trousers, long-sleeve shirts, vests (aka waistcoats) and overcoats down to the calf. Frock-style coats are the popular choice for outwear, although the looser-fitted sack coat (mid-thigh length) slowly became acceptable for informal wear. Breeches were for court wear, and knickerbockers for certain outdoor activities. Vests were fitted, but not to the extreme of the Regency period, and could sport a range of lapels. Fashionable vests had a shaped bottom – coming to  points, not cut straight across as per later fashion.  Shirts had low collars, and could be worn with cravats or neck ties, according to taste.

Hats were always worn by both sexes and all classes. Affluent gents couldn’t go wrong with a top hat when outdoors on a sunny day, and the bowling hat makes its first appearance among the working class. Through the mid-19th century, ladies hats progressed from the all-encompassing coal-scuttle stereotype (the poke bonnet) to smaller, elaborate hats that perched atop the head. Ladies wore linen caps, indoors.

We don’t have artificial fibers yet, but you know what we do have? The very first artificial dyes, and our umpty-great grandparents were mad for them. More on that in a moment.

Cotton, linen and wool are in use, in all weaves. The Jacquard loom is on the scene, so we start seeing multi-colored brocades as well as two-tone damasks. Printed cloth is easily available and popular – usually cotton, but also in other fibers. Asian motifs start to appear in some prints, otherwise geometric patterns (checks and plaids) and small floral patterns are popular for the ladies. Chaps tend to be stuck with solids and the more boring checks, but not entire because of my favorite thing about this period.

My favorite thing about this period? These guys popularized paisley. Not just any paisley, but bright, eye-popping orange-and green-and-purple paisley. Because of black and white photography and the toll time has taken on surviving garments, we can’t help but think that the everyday wardrobe of a middle-class mid-century person as dull and drab. Far from it. Colorful cloth had become affordable, thanks to the Industrial Revolution, and everyone wanted to wear it. Formal wear was more restrained, of course, and men weren’t walking around in paisley trousers (just their shirts!), but this was a colorful era.

However, it wasn’t a heavily embellished era. The home sewing machine hadn’t quite made it on to the scene yet, so ladies making their dresses at home would rarely have the time to add ruffles or lace or other fripperies to a dress. Time-consuming and/or costly embellishments still belonged to the upper class.

What You Can Use

Wool and wool blend suitings are always an option for both men and women.

My usual rules for velvet are in force: silk/rayon velvet is nice, but probably too expensive. Consider triple (aka acetate) velvet for a lush look at a lower price.

Taffeta – silk is always nice, but use polyester and acetate if that’s all you’ve got. “Shot” silks – aka “two-tone” or “cross woven” fabrics are popular for formal dresses. Striped taffeta is even more awesome.

Multicolored brocades are a great go-to for a fancy vest for the gents.

Printed and plain fabrics, as long as the print suits the period. Gingham and plaid checks were popular for both men and women. Large and small floral motifs were also used. Contrasting stripes were a thing. Don’t forget about the paisley!

Stay the Hell Away From

Polyester velvet. It’s shiny and doesn’t drape well. Only use it if your budget can’t manage anything better.

Most printed cottons out of the quilting section. Quilting cotton is softer than typical garment cotton and won’t last you as long. Also, the patterns and motifs popular among the quilting crowd are rarely acceptable for a 19th century look.

Patterns that aren’t appropriate for the period, such as polka dots. Check out the resources page for tips in that direction.